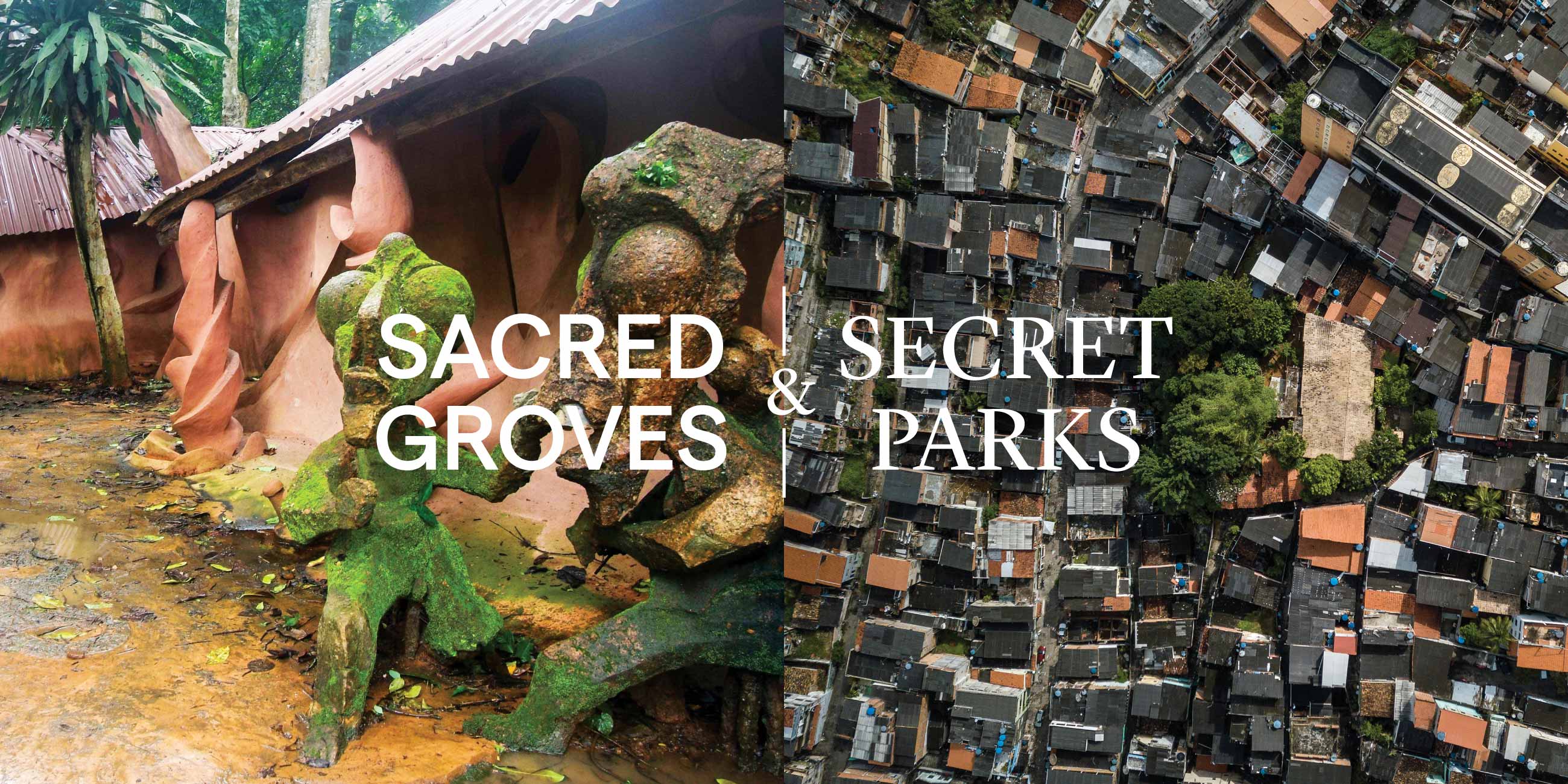 The Sacred Groves and Secret Parks colloquium and exhibition will bring together insights on the materiality and spatiality of Afro-religious diasporic practices, decentering Western canons of knowledge and leading to new design possibilities for Brazilian and West African cities.

Landscapes of orisha devotion are often manifested as sacred groves, where devotees cultivate orishas—deities, or energies of nature, in Yoruba tradition that enable all forms of life—using combinations of botanical manipulation, animal sacrifice, music, and dance. In the process, Afro-diasporic memories, knowledge, and environmental understandings are made manifest and empowered.

A crucial feature of such spaces is that they often occupy a luscious green expanse, adjacent to urban settings and in some cases occupy areas larger than football fields. Once associated with every town in Yorubaland, the groves of West Africa are largely depleted. In contrast, orisha groves in Brazilian cities are plentiful but are often protected by the necessity for secrecy that stems from practicing African traditions within a wider national racist context. As significant urban green spaces, these landscapes inevitably have an impact on urban ecologies and create important social, cultural, environmental, and political relationships with their surrounding communities.

While scholarly interest on the African-diaspora and the so-called “Black Atlantic” have grown, relatively little attention has turned to the flows and interwoven perspectives about spatiality, environmental preservation, and landscape architecture. The colloquium will bring together experts from different fields to contribute to research projects intended to elucidate some of these relationships, providing arguments both for the necessary anti-racist struggles and the recognition of environmental preservation movements led by black diasporic communities.

Speakers will share knowledge regarding the materiality, conservation, design, and spatial forms manifest in landscapes of orisha devotion in Brazil and Nigeria. The colloquium will chart new territory in the spatial and material studies of groves, particularly those sacred groves—known in Nigeria as shrines and in Brazil as terreiros—moving from an understanding of what we do know to what we can know.

This colloquium and exhibition hosted by the Department of Landscape Architecture in collaboration with the:

Panel 1, Materialities: The energies of nature (orishas) and their spatial relationships, including the mineral, botanical, and animal conditions required for rituals.

Panel 2, Cases in Conservation: Sacred groves, shrines and landscapes of orisha devotion in West Africa and Brazil that have been conserved. The panel will address the future needs of sacred groves in light of pressures for development.

A parallel exhibition of photographs by Alophus Opara of the Osun Sacred Grove in Nigeria and by Leonardo Finotti of terreiros in Salvador da Bahia will help articulate the spatial conditions of sacred groves and secret parks.

Panel 3, Designing Sacred Groves: Design processes for new sacred groves and for the redevelopment of others and a discussion of their plans and aspirations.

* Presentation will be in Portuguese.

This colloquium will be live-streamed. Simultaneous translation will be available.

Olatunji Adejumo (Lagos, Nigeria) is a landscape architect, natural resources planner, and Associate Professor in the Department of Architecture, University of Lagos. Dr. Adejumo’s research theorizes indigenous planning and its influence on rethinking the public realm as a place where culture and nature work together.

Erwan Dianteill (Paris, France) is Professor of Cultural and Social Anthropology at the Sorbonne (Paris Descartes University). Since 2007, he has been conducting fieldwork in Porto-Novo, Benin, on the transformation of the Fa/Ifa divination in a modern African city.

Tao DuFour (Ithaca, NY) is Assistant Professor at the Department of Architecture, Cornell University. His research focuses on phenomenological accounts of the experience of spatiality and the ‘natural’ world, and explores the relationship between ethnography as a descriptive method and phenomenological description.

Princess Adedoyin Talabi Faniyi (Osogbo, Nigeria) is an Orisha high priestess and the daughter of Chief Susanne Wenger. Princess Adedoyin is a key volunteer of The Adunni Olorisha Trust working to protect the Sacred Groves of Osogbo, a UNESCO World Heritage Site.

Marcelo Ferraz (São Paulo, Brazil) is a co-founder of Brasil Arquitetura and professor at the Escola da Cidade in São Paulo. The firm has developed projects for museums, residential buildings, social housing, and community and cultural centers. Ferraz has received many awards for his work.

Paula Gomes (Oyo, Nigeria) was appointed Honorary Cultural Ambassador by the Alaafin of Oyo in 2012. A Portuguese citizen, Paula studied linguistics and history at the University of Augsburg in Germany and has researched Yoruba culture and spirituality since 1992.

Samuel Lira Gordenstein (Los Angeles, CA) is a Senior Historical Archaeologist at Applied Earthworks, Inc. His current research in Bahia focuses on the urban experience of the Afro-Brazilian population during the nineteenth and early twentieth centuries.

Dominique Juhé-Beaulaton (Paris, France) is an historian and research director at the French National Centre of Scientific Research (CNRS). Dr Juhé-Beaulaton has worked for a long time on the history of landscapes and the management of ‘natural areas,’ particularly sacred forests in West Africa.

Moisés Lino e Silva (Salvador, Brazil) is Assistant Professor of Anthropological Theory at the Federal University of Bahia (UFBA). He works within the field of political anthropology, specializing in the ethnographic study of freedom and authority as related to poverty, sexuality, and religion.

Maria Alice Pereira da Silva (Salvador, Brazil) researches current Afro-Brazilian issues, with particular interest within the fields of human rights, social inclusion and public policies. Maria Alice is an attorney, holds an MA and is a PhD candidate in the Faculty of Architecture and Urbanism at the Federal University of Bahia.

Vilma Patricia Santana Silva (Salvador, Brazil) is a graduate student in architecture and urbanism at the Federal University of Bahia. Guided by Afro-Brazilian deities, she has designed and built several terreiro community projects as a volunteer architect.

Vilson Caetano de Sousa Jr. (Salvador, Brazil) is Babalorisha at Terreiro Ilê Obà L’Okê in Salvador and a professor at the Federal University of Bahia. Vilson has a research focus on Afro-Brazilian populations and has worked on the anthropology of food for over 30 years.

Fábio Velame (Salvador, Brazil) is professor in the Faculty of Architecture at the Federal University of Bahia. His research includes sacred groves and ethnic-African architecture as well as Afro-Brazilian slave housing and quilombos.

John Beardsley (Washington DC) was an adjunct professor at the GSD from 1998–2013 and recently stepped down from his position as Director of Garden and Landscape Studies at Dumbarton Oaks Research Library and Collection. Beardsley is editor of Cultural Landscape Heritage in Sub-Saharan Africa (2016).

Gary R. Hilderbrand (Cambridge, MA) is a founding principal of Reed Hilderbrand, and the Peter Louis Hornbeck Professor in Practice of Landscape Architecture at Harvard GSD where he has taught since 1990. Hilderbrand has an abiding commitment to promoting a heightened focus on urban forestry practices.

Susan Nigra Snyder (Philadelphia, PA) is a Lecturer in Architecture at Harvard GSD and Area Head of the Critical Conservation MDes area group. Snyder is a registered architect practicing with George E. Thomas, Ph.D., a cultural and architectural historian in CivicVisions.

George E. Thomas (Philadelphia, PA) is a Lecturer in Architecture at Harvard GSD and Area Head of the Critical Conservation MDes area group. Thomas is a cultural and architectural historian practicing with Susan Nigra Snyder, a registered architect in CivicVisions.

Sarah M. Whiting (Cambridge, MA), Dean and Josep Lluís Sert Professor of Architecture, joined the GSD as dean in July 2019. She is a design principal and co-founder of WW Archietcture, and served as dean of Rice University School of Architecture from 2010–2019.

Síntesis (Havana, Cuba) is one of the emblematic ensembles of contemporary Cuban music known for the richness, variety and conceptual structure of their sonic style. They pioneered the fusion of Afro-Cuban ritual music with contemporary jazz and rock music. Since the late 1970s, they have developed a unique style and are among the most recognized and popular musical groups of the island. Albums by Síntesis, ANCENTROS I, II and III, are part of the Cuban rock-fusion classics.

Leonardo Finotti (São Paulo, Brazil) is an artist/photographer of international reputation who visually explores cities and architecture. Finotti’s work has been shown in many solo and group exhibitions and it is part of collections at MoMA, CMoA, Kunstmuseum Chur, and the Bauhaus, among others. Finotti founded obra comunicação, a collaborative communication office that produces articles, exhibitions, and catalogs.

Adolphus Opara (Lagos, Nigeria). Opara’s work is induced by encounters with people and their daily effort to exist amidst obstacles that define and situate their individual locality. Opara uses visual storytelling to better understand as well as to show his connection to the issues that confronts him daily. Opara’s work has been widely exhibited at many international venues including the Tate Modern in London.

Michelle Jean de Castro (São Paulo, Brazil) is an architect and curator and has designed exhibitions, especially photo-installations, internationally. Michelle is founder of lama-sp, an artist run space in downtown São Paulo that produces exhibitions and publications that focus on photography, architecture and cityscape.

Anyone requiring accessibility accommodations should contact the events office at (617) 496-2414 or events@gsd.harvard.edu.

Free and open to the public